Fed Should Be Decisive

Fed Should Be Decisive

By the time you read this, the Fed may already have cut rates. That is the situation we find ourselves in given the recent correction in equities, which were at a record high only eight trading days ago but were down 12.8% from that peak as of the market close on Friday.

Fears about the economic effects of the Coronavirus have driven equity prices lower and led to calls for the Federal Reserve to cut rates. But we think a rate cut – any rate cut – would be a mistake. Nominal GDP – real GDP growth plus inflation – is up 4.0% versus a year ago and up at a 4.4% annual rate in the past two years. These growth rates suggest short-term interest rates should be higher, not lower. If people become less productive because they’re scared of getting sick, lower interest rates won’t change that.

Part of the problem is that the Fed spent much of 2019 agonizing over potential trade wars and Brexit, resulting in three rate cuts of 25 basis points each. Yet, in the end, key trade agreements were reached and Brexit didn’t tank the UK economy, much less hurt the US. The Fed didn’t need to cut rates last year and shouldn’t now.

However, the Fed looks poised to move, either at the next meeting on March 18 or perhaps before. That’s the upshot of Fed Chairman Jerome Powell’s Friday statement that the virus “poses evolving risks” the Fed is “closely monitoring developments,” the Fed will “act as appropriate to support the economy.” Clearly, a rate cut isn’t going to be able to cure a virus. However, the Fed believes that the higher asset prices that may result from lower rates will generate a “wealth effect” that boosts consumer spending and underpins demand.

Meanwhile, the futures market in federal funds is pricing in one 25 bp rate cut by March 18 and the market consensus is for three or four such cuts by the end of the year. The absence of any Fed pushback against these expectations suggests policymakers would be comfortable with this outcome, even though they’re not yet committed to fulfilling them.

This may sound odd at first. But if the Fed ends up cutting rates – again, a policy we think is unneeded and unhelpful – we think it should go big. Instead of trickling out measly little rate cuts of 25 bp each at the next few meetings, the Fed should cut rates by something like 75-100 bps all at once on or before March 18.

The key is that the Fed would then pair that one big rate cut with a statement, a “dot plot,” and a press conference that shows the Fed is committed to lifting rates back up once we’re past the economic fears related to the Coronavirus.

The problem with the drip, drip, drip approach is that if the Fed cuts rates only 25 bp while the market expects more rate cuts later on, it incents households and businesses to postpone activity and decisions. Why act now, when we all know rates are going even lower?

Again, the best option is doing nothing; monetary policy isn’t a flu vaccine and rates, as low as they are already, are not an impediment to economic growth. But if the Fed is ready to act, decisive would be much better than wishy-washy. 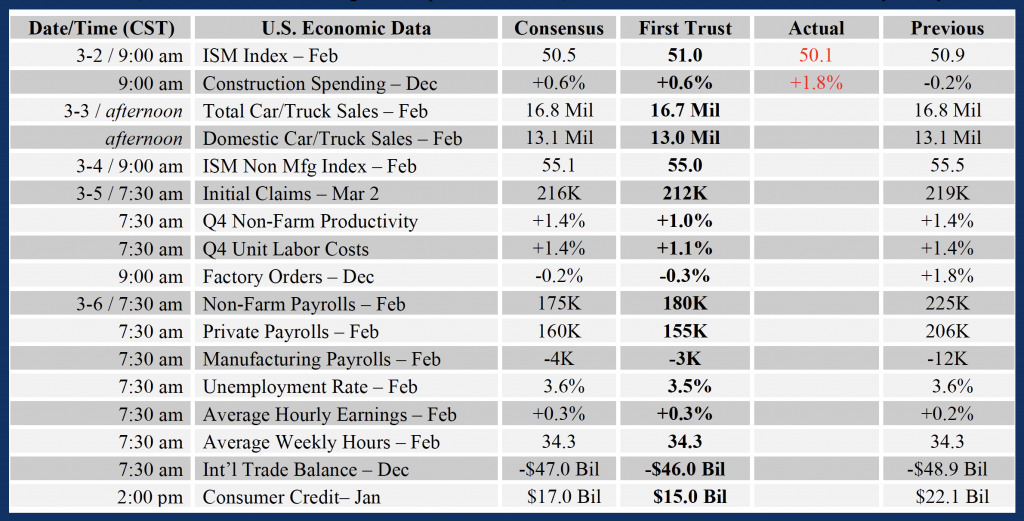