We’ve been “Comrades in Supply-side Arms” with Stephen Moore (now a Federal Reserve nominee) and Larry Kudlow (Administration Economist) for decades, with very few disagreements on economic policy.  However, with both having called for a 50 basis point cut in short-term rates, we find ourselves in total disagreement with their conclusion.

They both make supply-side arguments.  Kudlow told CNBC on Friday, “the [Fed] should not tighten just because of prosperity.”  We agree!  While Moore, in an op-ed, argued that a 15% drop in a basket of commodity prices during Q4 showed the Fed was too tight.  We’ve supported price targeting in the past.

It’s true the yield curve is flat – inverted in some places – but that’s because the market is pricing in a rate cut.  We don’t see it, nor do we see the reason for it.  Our model is simple: add inflation and real growth to get nominal GDP growth.  Then look at it over the past two years to remove volatility.  If the Fed lifts rates too close to nominal GDP growth, or over it, then it’s too tight.  Nominal GDP is up 4.9% annualized in the past two years while the federal funds rate is 2.375%.  The Fed is at least 200 basis points away from being too tight.

From 1913 until 2008, the Fed had to make reserves in the banking system scarce in order to lift rates.  It did this by selling bonds to banks and removing the cash from the system.  When rates moved above nominal GDP, it was a signal the Fed had removed too many reserves.  It was the lack of money, not the higher rates or the inverted yield curve, that caused the recession.  Then, the Fed would reverse course and buy bonds to inject reserves into the system, making them plentiful, which lowered rates.  It was the extra money that lifted economic growth, not the lower interest rates.

The Fed has now changed the system.  During the Crisis, the Fed injected trillions into the banking system, and there are now $1.5 trillion in “excess reserves.”  Normally this would automatically keep rates low.  But the Fed is paying banks interest on those reserves – currently 2.4%.  But this is an experiment.  No one knows if paying interest on reserves will keep banks from lending them out.  And, no one knows the exact interest rate needed to keep those excess reserves from creating inflation.  And as long as those excess reserves exist, the Fed isn’t “tight.”

Short-term rates are low, and there are other policies that risk slowing growth.  Government spending is growing faster than GDP and is projected to reach around 21% of GDP this year, taking resources from the private sector.  Tariff uncertainty doesn’t help either.  Bad policies are the most salient threat to growth.  Shifting blame to the Fed is not the answer. 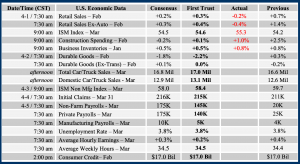